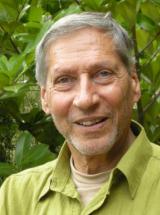 Willem Hoogendyk (Master of Law) is chairman of the Dutch Earth Foundation (a modest charity, Stichting Aarde) and member of the Dutch Platform for a Sustainable and Fair Economy, of the French group around the review on de-growth Entropia, and of the national hub of Transition Towns Netherlands. And since long a member of ECOROPA. Lives in Utrecht. Two children, and now three grandchildren. Hobbies: windsurfing and a modest art-collection.

Willem is a radical de-grower, an activist who, in 1970, started with biology students, Aktie Strohalm, an environmental group that was critical of society and the current economy as a whole. "The political world must become ecologically aware, the ecological movement must become politically aware." He is more an adult-educator than a scientist. "Whoever understands entropy, must become a radical reformer." Reformer? His basic book, however, is titiled The Economic Revolution, and he corresponded early on with Herman Daly, James Robertso and Hans Binswanger, whose books he reviewed for Dutch newspapers. With Binswanger he developed the concept of the money-driven 'compulsion to growth'.

Major publication: The Economic Revolution - Towards a sustainable future by freeing the economy from money-making, with editions in Indonesian (Obor, Djakarta) and Czech (Brno University); a French edition of the update - Le grand virage libérateur - is forthcoming, as wel as an edition in Spanish (Icaria, Barcelona) and a new one in English.

He is a member of ECOROPA and of the (younger) group & review on de-growth in France, Entropia, which he co-founded. His ideas about the money-driven compulsion to growth and for a flexibilization of the economy (from supply to demand) were already exposed in 1991 in hus book The Economic Revolution.
Several times he was invited to give a lecture or talk in Germany: Bonn (the Bund), Berlin (Jugendtagung), München (Regionalisierung) and in Mainz and Sankt Gallen (Gruppe Dinswanger, on his invitation. For some time they were befriended, even trying to write together...).

Keynote speech in the Bauhaus Dessau conference 1994: Wirtschaft von unten. (Translated into English, People's Economy, page 29).
In short, a pioneer, together with Birkhoelzer, Douthwaite, Conaty, Daly, Illich, Otto Ulrich e.a. Long before the Financial Crisis!
In his talks he makes use of illustrations, including funny cq. educative ones.
Articles in various papers and reviews. A recent article on Regreening and Economic