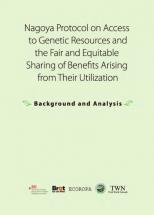 The fight against biopiracy and its injustice was the main impetus for the push to have an international treaty to be developed under the Convention on Biological Diversity (CBD). The Convention's third objective of fair and equitable sharing of the benefits from the utilization of genetic resources is itself the result of tough negotiation in the early 1990s when the misappropriation, even theft, of the resources of developing countries and of indigenous peoples and local communities gained international attention. After almost 20 years, when the Convention's broad provisions proved to be inadequate, the Nagoya Protocol on Access and Benefit-sharing was forged in October 2010. This new legally binding international treaty, however, was born in an atmosphere of controversy when its core content was ultimately decided by a few during the final days of the 10th meeeting ofthe CBD's Conference of Parties in Nagoya, Japan. This book, co-authored by six civil society participants who were actively engaged with the government negotiators and negotiation process, provides a rich account of the background and development of the Protocol. It analyses the main provisions of the Protocol and recommends several actions that can be taken at the national and international levels to ensure that the Protocol objective of fair and equitable benefit-sharing can be delivered with justice restored.