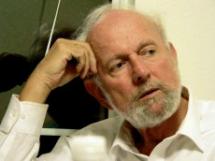 Co-Chair, International Resource Panel, Co-President of the Club of Rome.

Limits to Privatization - How to Avoid Too Much of A Good Thing.