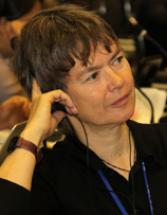 She has specialised in gene regulation and gene modification and has worked as a research scientist in the field of mutational analysis, gene identification and gene therapy in university and hospital settings. Since 1995 she has been working on genetically modified organisms, their risks and potential consequences on health, food security, agriculture, biodiversity and ecosystems.

GM trees, GM mosquitoes and genetic use restriction technologies (GURTs, e.g. terminator technology) are a particular focus. Synthetic biology has become an added focus since 2007, as well as certain aspects of geo-engineering.
She is advisor and consultant to many national and international organisations and processes and has acted as scientific expert in governmental and public consultations and court cases. She collaborates and works alongside civil society organisations, women’s organisations and farmers’ groups in the global North and South, in particular Asia. She is also on the board of several organisations.

She has been closely involved with the UN-led international negotiations and implementation of the Cartagena Protocol on Biosafety of genetically modified organisms since 1995 and serves on its Ad Hoc Technical Expert Group (AHTEG) on Risk Assessment and Risk Management of Genetically Modified Organisms. She has also been involved in the processes of the UN Convention on Biological Diversity since 1998, including its Subsidiary Body on Science, Technical and Technological Advice (SBSTTA) and the Working Group on the Review of Implementation (WGRI). She has also been involved in the Working Group on Article 8j (Traditional Knowledge, Innovations and Practices of indigenous and local communities), especially with regard to GURTs (e.g. terminator technology).

She is a member of the Federation of German Scientists and a founder member of the European Network of Scientist for Social and Environmental Responsibility. She is presently co-director of Econexus.