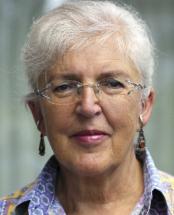 Christine von Weizsäcker, born 1944, is biologist, author, researcher/ activist, and lives with her husband Ernst von Weizsäcker, her children and grandchildren in the Southern Black Forest.
She has contributed the term “Eigenarbeit/ Eigenwork” to the discussion on work in the informal sector, and “Fehlerfreundlichkeit/ Error-friendliness“ as a criterion of technology assessment, which goes beyond robustness and resilience. She has been working on technology assessment for civil society since the Mid-Seventies.
She participated in the negotiations of the Rio Process on Sustainable Development since 1992, and has been nominated and appointed as the expert for the Major Group “Women” in the negotiations leading up to Rio+20.
Since 1994 she has participated as an NGO representative in the negotiations of the Convention on Biological Diversity (CBD) and its Protocols: the Cartagena Protocol on Biosafety, the Subsidiary Protocol on Liability and Redress to the Cartagena Protocol, and the Nagoya Protocol on Access and Benefit-Sharing. She has been member of many Government and Church bodies and committees.
Presently, she is president of Ecoropa, president of Women in Europe for a Common Future (WECF), member of the Advisory Committee of the German Society for Human Ecology and Board member of the Federation of German Scientists. Her many publications and lectures have contributed to the scientific and public debate on nuclear technology, genetic engineering, sustainable consumption and production patterns, and, of course, addressed many aspects of the wide biodiversity agenda, where the well-being of people and bidiversity are intrinsically linked.